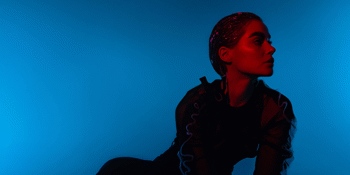 With a hazy blend of electro-psych-pop, Perth's self-produced singer-songwriter, Grace Sanders uses enchanting melodies that are entwined with her radical, carefree attitude all while getting wrapped up in a cosmos of dirty synths and psychedelic guitars. Since 2017, Sanders has released three singles that have displayed her songwriting diversity, vocal prowess and ability to sell-out shows which in turn has gained her a substantial social media following.

In the second half of 2020, Sanders released her newest incarnation of herself with her single ‘GREEN’ followed by ‘NO FAIR’ - both provided a taste of what was to come in 2021.

With the eloquent, mesmerizing and ever-evolving display of her maturity as a songwriter, Sanders released the lead single ‘DISSIPATE’ before releasing her debut EP ‘GUMS’ (released February 26).