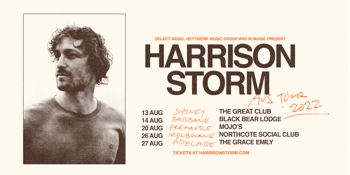 Mojo's Bar (North Fremantle, WA)
Saturday, 20 August 2022 8:00 PM
52 days away
18 Plus
Acoustic
Folk
Send this event to
Ever since he first exploded onto the scene in 2015 with his debut EP Sense Of Home, Storm has been compared to a range of beloved artists, from Ben Howard to City And Colour. But, though suitably lofty, those comparisons don’t quite capture what makes Storm special. In truth, the musician is that all too rare kind of artist: one who sounds like nobody but himself, who takes his influences and his unique worldview and mixes them up into beautiful, acoustic-led ballads of redemption and grace that could only have been written by him.

A born troubadour, Harrison traded college for busking in Melbourne. The fruits of his impromptu performances financed that 2015 debut EP. The title track Sense Of Home became a worldwide hit and generated upwards of 85 million Spotify streams and earned the attention of Nettwerk C.E.O. and co-founder Terry McBride, who reached out to him via Facebook.

Once Storm was signed to Nettwerk, he unveiled 3 further EPs containing emotional songwriting that have won him a bevy of fans with tracks like Change It All, Be Slow, Feeling You & Falling Down.  Along the way, he occupied real estate on coveted playlists such as Your Favourite Coffeehouse, Relax & Unwind, The Stress Buster, and more as the total stream tally exceeded 275 million and counting.

With a charismatic presence on stage, Storm made a name for himself on the road, sharing stages across the world with acts like Snow Patrol, Gregory Alan Isakov, SYML, Ziggy Alberts and Hollow Coves. His music also received widespread support courtesy of radio tastemakers KCRW, Triple J and BBC Radio 2, as well as appearing on high profile tv shows such as The Blacklist, The Fosters, God Friended Me, Degrassi: Next Class, Love Victor, All American, This Is Us & Cold Justice.


2021 saw Storm try something new, a collaboration project with fellow Melbourne singer-songwriter Enna Blake. The pair found themselves living and creating together in an artistic share-house by the ocean throughout the pandemic lockdowns of 2020 and 2021. Being by the sea and in lockdown, the distractions of everyday life drew to a halt and created a deep, quiet space for reflection about the way we live. This energy seeps into their debut four-track EP, Under Dusk.


Over the course of a few short years, Storm has moved from strength to strength, evolving and changing in the way that all truly great artists do. And there, at the heart of it all, is his music: ballads that tremble with love, and with heartache, and above all, with a great, overwhelming sense of care. You would do well to give him your attention. His songs demand it.