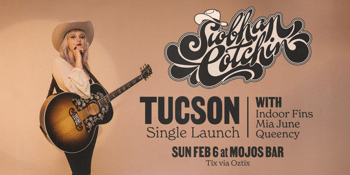 Siobhan quickly became one of Australia's favourite new artists, winning over hearts with her debut single ‘Tear Myself Apart’ which exploded nationally. It was swiftly followed by four mesmerising tracks ‘Do You Know What I Mean?’, ‘Just The Way It Is’, ‘The Fair-Weather Friend Blues’ and 'Highway Song’.

You’ll be forgiven for thinking Siobhan is well beyond her 21-years of age. Honest, raw and real — Siobhan Cotchin has proven herself to be a talented songwriter. Able to simply decode complex human relationships, she gets listeners right in their feels. Her live sets have quickly gained momentum, supporting Bob Evans, Robert Forster (Go-Betweens), Spacey Jane, Abbe May and The Kill Devil Hills.

With a writing style that echoes the effortless musing of Lucinda Williams, laced with inspiration drawn from Bob Dylan, Siobhan’s jangly luminous melodies hover over storytelling lyrics as she effortlessly pulls the listener into a world of introspective self-discovery. A world that’s all her own.

Every one of her releases has been played on national radio — on repeat. Cotchin had multiple singles sitting in the Triple J Charts for a number of weeks which has earnt her serious accolades from some of the music industry’s heavy hitters. In what seems like lightning speed, Siobhan Cotchin has made her mark on the Australian music scene.